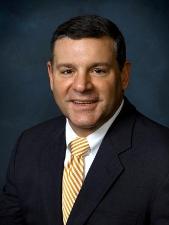 Since joining NCDS in 1995, Tom DiFiore has directed, supervised, and developed hundreds of fundraising campaigns for diverse client organizations in communities across the U.S.  Thousands of direct solicitations, confidential interviews, and committee meetings have developed his skills in aligning client programs with stakeholder interests.

After managing campaigns as an on-site director, supervising the firm’s project support team, and developing new clients as a business development officer, Tom became NCDS’ President in 2010.  In 2018, he assumed chief executive responsibilities from the firm’s founder, Howard Benson.  Tom’s primary role as CEO is direct engagement with every client to ensure effective delivery of NCDS’ proven process in pursuit of on time, over goal campaigns and a productive experience for client staff and volunteers.  He believes that the firm’s success is best measured by the success of its client communities, and that campaign success is achieved through uncompromising commitment to three core fundamentals: an honest and prescriptive up-front assessment; securing buy-in and ownership from the right leaders; and adherence to sound fundraising methodology.

Tom’s involvement in campaigns that have raised hundreds of millions of dollars for a wide range of projects is a great source of pride and satisfaction.  He has helped develop and design new organizations and initiatives in several communities, including Missoula, MT; Hendersonville, TN; Mankato, MN; Redmond, WA; Jonesboro, AR; and Fargo, ND.  He has assisted a number of arts, culture, educational and sports organizations ranging from a major ballet company to a high school football booster club.  And he has played a recurring role in program design, testing, and funding for some of NCDS’ most enduring client organizations in Raleigh, NC; Tacoma, WA; Mobile, AL; and Sioux Falls, SD.

Toms holds a B.A. in economics from the University of Virginia and a M.B.A. from Georgia State University. He is a former board member of the Giving Institute and is a frequent speaker / presenter for regional and national associations representing chamber and economic development professionals.  He spends his free time in Atlanta on the golf course, and with his wife, three children, and two dogs.

“The long-term progress and success of many of our client communities is especially rewarding, and a testament to what can be achieved when you properly align sound strategies, committed leaders, and requisite financial resources.”